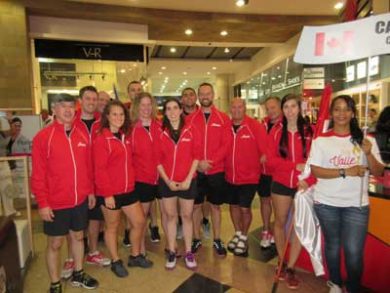 Jericho Physio’s Bob Fong traveled to the 18th World Racquetball Championships in Cali, Columbia (July 15 – 23, 2016) where he served as Team Physiotherapist for the Canadian Team.

We had a chance to ask Bob a few questions about his travels and experience as the Team Physio.

What was the lure for you to travel with the Canadian Racquetball Team again?

I really enjoy the sport of racquetball – the players are gifted, the fans are great – and it’s a fast, exciting sport requiring full-body athleticism. Plus, getting back into the competitive sports arena was an area in my Physio practice that I was simply missing.

Back in May 2015, the Canadian Racquetball Nationals were held in Burnaby and I was asked to provide coverage for the National Team. This connection reignited my strong interest in helping these athletes during tournament conditions – and also inspired me to work towards applying for the Physio position at the 2016 World Championships.

Also, the Colombian Team and local fans were sure to host a memorable event in Cali – especially after capturing the Men’s Doubles Gold over Canada at the 2014 World’s in Burlington (ONT). Let the games begin!

Team Canada at the Opening Ceremonies. 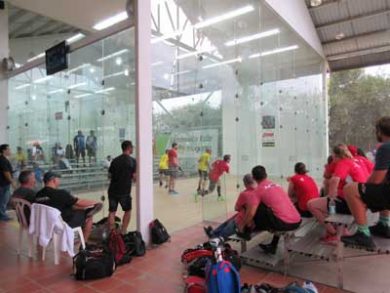 All eyes on the Canada versus Columbia Men’s Doubles rematch on the stadium court.

What was special about the 2016 Racquetball World Championships?

This was my 4th World’s with the Canadian Racquetball Team – and after a break from International competition, it was exciting to be part of the support system again for these talented elite athletes. I truly enjoy the Team experience – and the world’s best players are phenomenal to watch!

The World’s are held every 2 years and draw teams from Asia and Europe alongside the Pan American teams of North, Central and South America. This year, there were 90 athletes representing 20 countries – and I must say, the Racquetball community is a wonderful crowd, so it was very rewarding to meet up with familiar faces and also make new connections on and off the courts. 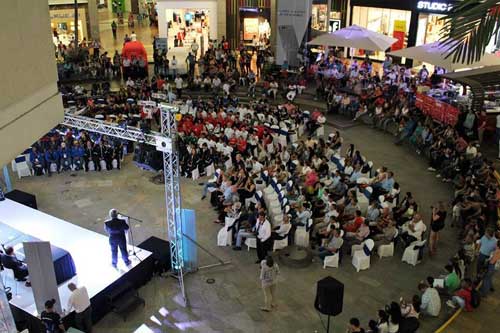 The crowd at the Opening Ceremonies. 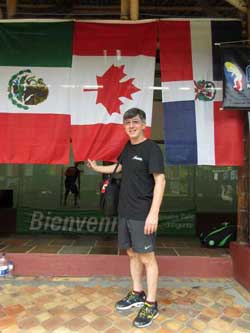 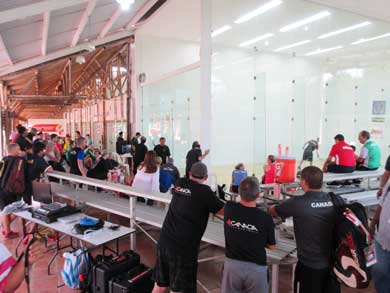 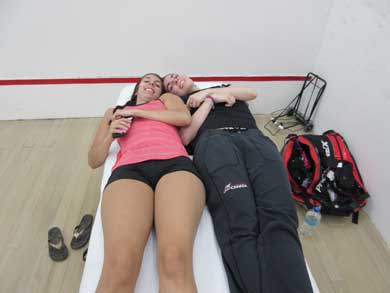 Michele and Frédérique looking for Pokemon on the treatment table – for real folks!

What equipment do you have to take on these trips?

My portable treatment table and my sports kit bag are my staples on these trips. My table is always a curious item at airports and usually gets to travel as extra (oversized) luggage – but it provides a comfy surface for the athletes to get treated and also saves my back from the rigours of trying to treat on the floor or a bench at the courts. “Physio protect thy own back” is an important factor – so now I use a fold-up trolley to help transport this bed from hotel to courts and return.

Two other items I always travel with are my ice bag and my portable Ultrasound machine. Since ice is a hard-to-find item at the courts, my ice bag is usually filled at the hotel and provides the athletes with an option to ice-down immediately post match. And the Ultrasound machine is a valuable modality to treat soft tissue contusions (swelling +/- bruising) and ball welts A.S.A.P. (yes it hurts to get hit by a high speed racquetball). 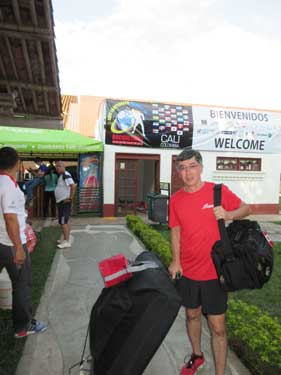 Back to the hotel after a long day at the courts. 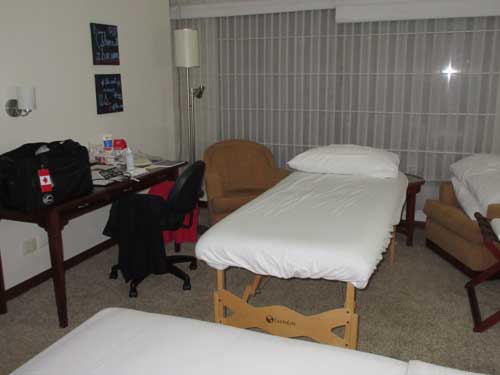 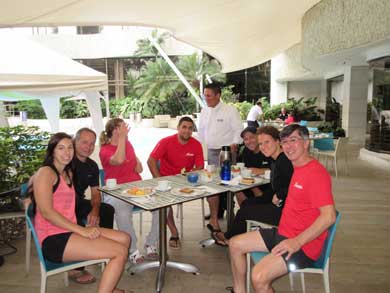 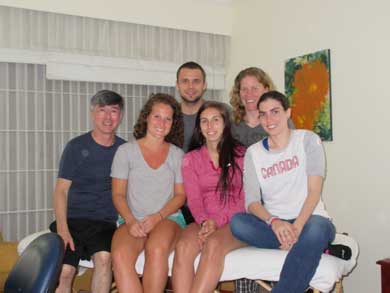 By appointment only! There were 93 treatment visits plus 1 injury time-out delivered at this event.

What does a typical tournament day involve for the Team Physio?

The day starts early with the first matches usually scheduled for 9 a.m. That means being ready to roll on the 8 a.m. bus shuttle to the courts.

The Coaches and myself typically meet at breakfast in the hotel to discuss any athlete concerns and plan our day at the courts. A full day for Canada involves 6 matches (4 singles and 2 doubles), so, depending on the court times, the support staff can be at the courts ’till 6 p.m. or later.

My treatment bed, kit bag and ice bag always make the journey to the courts. Warm-up and cool-down treatments are provided for the athletes – plus court-side coverage for any injury time-outs or medical intervention during the matches.

After all the Canadians have finished playing for the day, we take a return shuttle to the hotel for a shower and quick change before dinner. Thankfully, we are blessed with a good assortment of restaurants at the Unicentro Mall close to the hotel.

And then it’s back to the hotel room to provide the evening session of treatments for the athletes. Depending on the requests for treatment, this session can last upwards of 2 – 3 hours, so I’m ready to call it a day by the time I’ve treated the last athlete. The Physio needs to sleep as well! 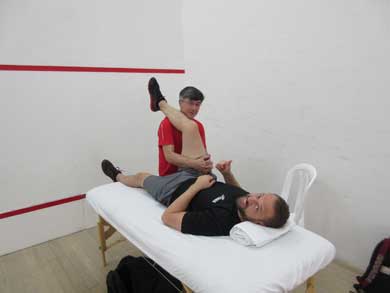 Thumbs up from Mike before his match. 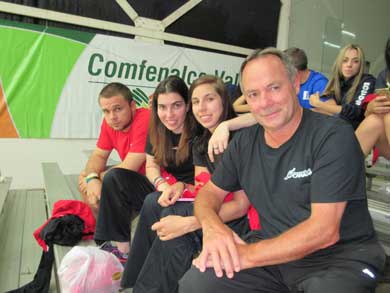 Sam, Frédérique, Michele and Michel – friendly Canadians in the crowd. 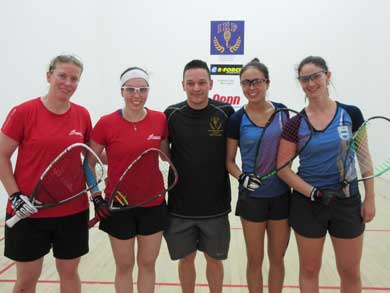 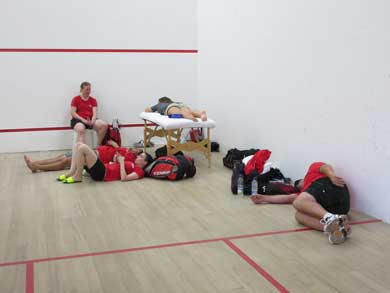 The Canadian treatment zone becomes the local hangout and resting place too!

What special techniques do you use at these tournaments?

My manual therapy, sports and orthopaedic training provides the baseline for assessing these athletes and developing a treatment plan. My Myofascial Release (MFR), Craniosacral Therapy (CST) and Visceral Manipulation (VM) training provide additional physio tools to help restore and maintain mobility, balance and fluidity with these players over the course of the tournament.

The sport of racquetball is fast-paced, requires agility and often the athletes are throwing their bodies on the court to retrieve shots and keep the ball in play. So there is a lot of body contact with the floor and other forces at play with the racquet swing and general biomechanics of the game – whether it be from diving or the rigours of a long rally with numerous directional changes in their footing or racquet positioning.

It’s a full-body sport for sure – and there are a lot of compressive forces at play when these athletes are hitting the ball over 150 km/hr and also sprinting, maneuvering and diving on the 20 x 40 foot court. The hips/pelvis/lower back and the shoulder girdle/upper back are the areas that receive the most treatment during this 10-day event.

I have learnt that these athletes respond well to the gentle but specific techniques of MFR, CST and VM. Essentially helping the athlete unwind tension in their whole-body system, restore balance in their breathing, and also calm the nerves and anxiety of their system as the tourney unfolds and the competition intensifies during the elimination rounds.

Helping an athlete rebalance their breathing after multiple dives during their match (because organs can get shifted during impact and affect the respiratory diaphragm), or inducing a still-point (CST) to calm their system and recenter their body awareness, can be both physically restorative and mentally balancing for their focus. 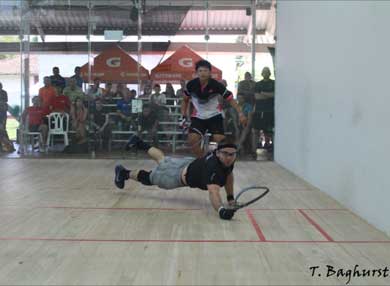 Sam in full flight during his semi final match – diving is part of this exciting sport! 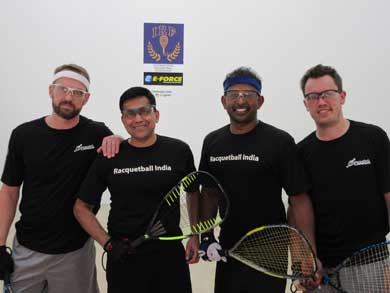 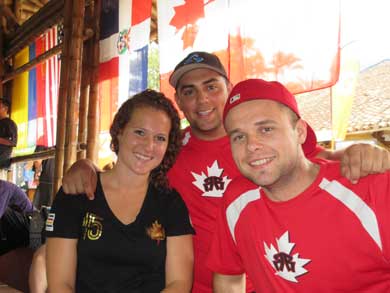 All in a days work – keeping the athletes relaxed but also focused and ready to play. All smiles from Christine, Pedro and Sam at the courts! 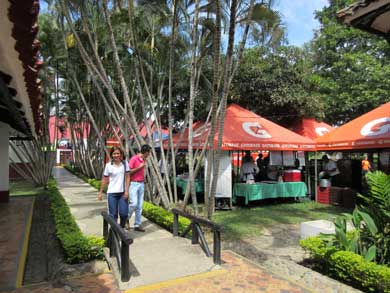 Journey to the courts at Club Cañasgordas Comfenalco Cali.

What were some of the highlights for you on this trip?

I’m proud to say that the Canadians were represented by a strong group of 8 athletes – a nice mix of some veteran players and some rising stars in the sport. It was a solid, respectful and united Team that was well supported by the 2 coaches – Michel Gagnon (Canada’s most experienced Head Coach) and newcomer Corey Osborne (Assistant Coach & former National Team player). The Team dynamic was both enjoyable and satisfying all ’round!

Professionally, I had the opportunity to meet medical staff, team trainers and athletic therapists from other countries – as well as the dedicated group of Cali Physio’s who provided general athlete coverage during the tournament. It is always mutually rewarding to exchange different treatment approaches and medical support during the competition. 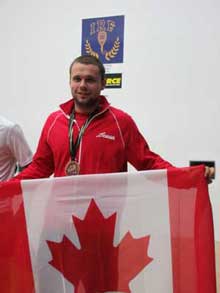 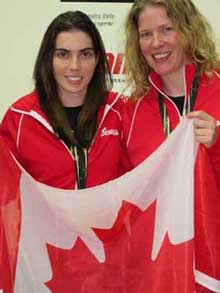 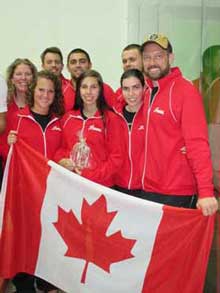 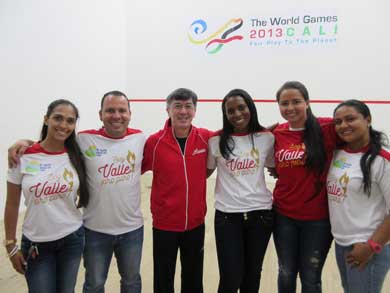 Mutual respect and support with the local Cali Physio team. 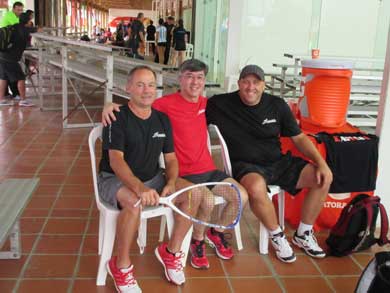 Thanks for taking the time to read about my work and travel adventure!

If you’d like to consult with Bob, or one of Jericho’s other physiotherapists, please call our office at 604-228-1474 to arrange an appointment, or use our online request form. We treat sports injuries, chronic sport-related pain, and perform running and movement assessments that can help improve your performance and reduce your risk of re-injury.